Get quotes Search deliveries How it works Help Categories 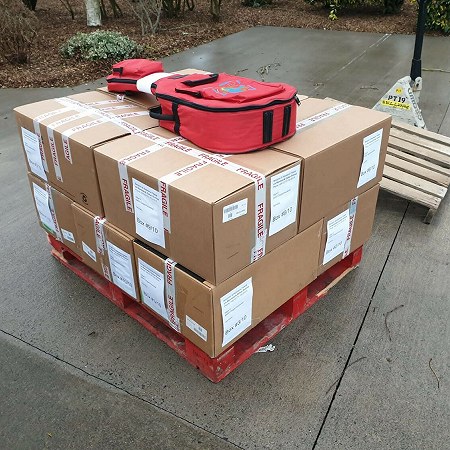 Pallets are used to carry items of different kinds – they serve as a platform for transporting sets of small parcels, objects or some bulky house appliances awkward to move. Pallet shipping is one of the most frequently chosen mean of transport for carrying big loads.On pallets you often ship deliveries above 70 kilograms for example entrance gates, boxes, construction equipement etcetera. To get the best quotes for transporting pallet from skillful transport providers that specialise in pallets transport post your listing on Clicktrans. The key thing in calculating pallet shipping is to know the exact number, weight and type of items that will be shipped. Loaded pallets are lifted by forklifts.

Europallets and other pallets

Europallet, also called EPAL or EURO is the one most frequently used in pallets transport. Its regular dimensions are 800x1200x150 mm. These numbers can vary depending on the type and use of a pallet, although europalet size is rather consistent from one producer to another. In the industrial transport there are also so-called EUR2 pallets. They are 1000 mm wide, 1.2m long and 144mm tall.  The ones 1135 x 1133 mm are used for shipping intermodal conteiners. Oftentimes, wooden pallets are replaced by plastic ones due to their longer usability. Plastic pallet can be useful from 10 up to 15 years.

Cost of pallet shipping in the EU

Average cost of pallets transport on global routes is 120 GPB and 10p per kilometer.